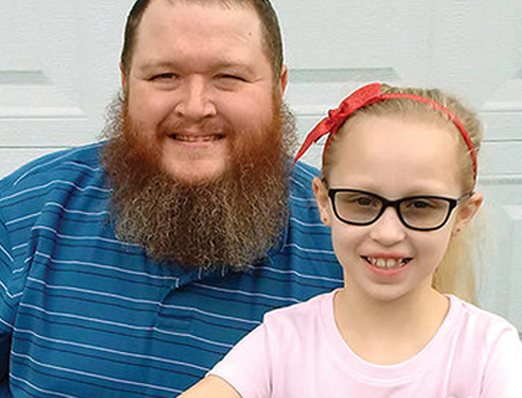 This Dad And Daughter Duo Have A Fighting Chance

ARE BORN WITH HEMOPHILIA

Chris and his daughter Allyson both have an inherited bleeding disorder that prevents their blood from clotting properly. The treatments that have been helping him, are now helping his daughter live a good life.

Chris knows all too well what it’s like to live with hemophilia, which is an inherited bleeding disorder that prevents his blood from clotting properly. In severe cases, the mortality rate for people with hemophilia is four to six times higher than that of healthy individuals. His young daughter Allyson was also diagnosed with hemophilia, but fortunately, she too is able to get the same kind of help her father received as a child — thanks to donated plasma that replaces blood clotting factors, allowing their blood to clot properly.

As he reflects on the standard whole blood and Fresh Frozen Plasma protein therapies he received as a child, he can’t help but marvel at how treatments for bleeding disorders have evolved over the past 40+ years and how they now offer a near-normal life expectancy. He views the various plasma-derived and recombinant coagulation products available today as a blessing that lets them enjoy their daily lives and believes his daughter will have an even better quality of life and health outcome than he did.