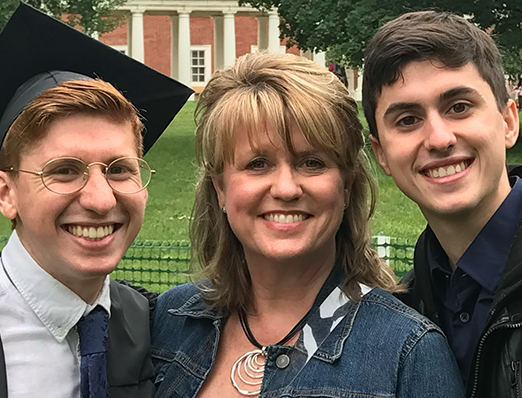 For Those Like Brenda, Plasma Treatments Are Their Only Shot At A Normal Life

Brenda was fearful she wouldn’t be around to see her two sons grow up. Her plasma protein therapy turned a grim future into one of hope and gives her the opportunity to live a normal life as wife and mother.

When Brenda first started exhibiting symptoms, she didn’t think much of it.

She attributed her stumbles and falls to moments of clumsiness. When she lost full range of motion in her toes, she chalked it up to a pinched nerve. However, the weakness in her legs got progressively worse until she started to feel like she was constantly walking through a sludge carrying a heavy backpack and could barely complete everyday chores without having to stop and rest.

Brenda finally went to the doctor, but her MRI came back normal. She then went to a neurologist who narrowed it down to a few possibilities including CIDP and ALS. She was referred to a specialist at Johns Hopkins University, who, after a series of tests and a nerve conduction study, told Brenda that while she did not have the gene for ALS, they could not rule it out as a diagnosis.

The doctors told her to begin considering the worst possibilities and to get her affairs in order. It was a terrifying time.

Tests continued until she was finally diagnosed with multifocal motor neuropathy (MMN) — an incredibly rare and often-misdiagnosed autoimmune disease where the muscles and nerves aren’t communicating, so the body attacks itself, leading to severe weakness and cramping. Immunoglobulin therapy (IG) is the only known course of treatment for MMN. And it was  Brenda’s positive response to the IG that ultimately steered the diagnosis away from ALS. The doctors began Brenda on IG as a last-ditch effort to get the disease under control. If untreated, Brenda would have gotten increasingly weaker, ultimately ending up in a wheelchair and possibly even losing the use of her hands.

With regular IG treatments since 2013, Brenda has been able to get her life back. Her nerves have had a chance to heal, and she’s stronger now than when she was diagnosed. She leads a relatively normal life and credits plasma protein therapy for ensuring that her disease hasn’t progressed.