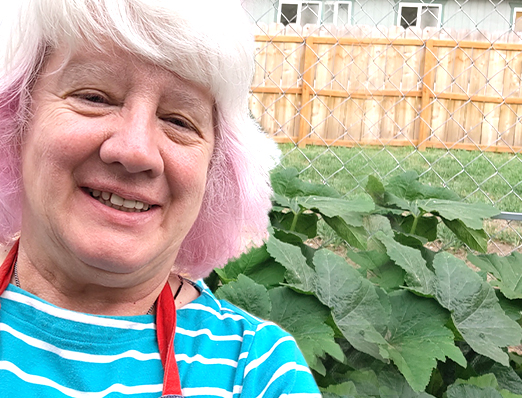 Becky is afraid of needles and can’t stand the sight of blood, but that hasn’t stopped her from donating plasma twice a week for nearly six years — because she realizes how important treatments made from plasma are.

When Becky’s brother-in-law was diagnosed with lung cancer and began receiving treatments derived from plasma to manage his symptoms, the preciousness of blood plasma quickly became obvious to the family. While her husband and sons immediately began donating, Becky hesitated. Since she was once told she wasn’t a good candidate to donate blood, Becky didn’t think she would be a good fit to donate plasma either. However, not wanting to be the only one in her family who wasn’t donating, she decided to give it a try.

Becky has since donated plasma over 425 times — and her fear of needles and dislike of the sight of blood hasn’t stopped her from going in twice a week, nearly every week, for the past six years. Even though they now live 40 minutes away from the plasma donation center, she and her husband have continued to make the drive because they’ve seen first-hand how effective plasma-derived treatments can be and know that there is real need for plasma donations.

Recently, Becky and her husband were back at the donation center and were excited to see the staff after a pause during the pandemic. After six years, Becky feels the crew at the donation center are not just friends, but an extension of the family. As a retired couple, they also appreciate the compensation which she says has been helpful to supplement their income.

Becky still doesn’t look when the needle goes in, but she’s now comfortable enough to look over and “watch the amazing machines at work” and encourages everyone to try donating plasma — just like she did.